Requiem of the Panda Mother: My Personal Evolution Through a Zoo of Parenting Styles

Before I had children (i.e. when I didn't know what the hell I was talking about) I dreamed of producing offspring who would be successful, productive, ambitious contributors to society.  Through my careful research of the best parenting books, optimization of crucial developmental periods and refusal to repeat the mistakes of my own mother (Sorry Mummy!) I was going to mother in a new generation of highly evolved prodigies.  And so, after the condom broke when I was blessed with my first child I went into the whole thing as a Tiger Mother.  I absolutely had to have the upper hand in every situation and he was going to grow up to be the best human being ever spawned on the planet or I would die trying.

Oh, the piss and vinegar of youth!

I didn't know what a Tiger Mother was back then but when I read some article on Amy Chua I recognized some of my younger self in there; back before Frick broke my spirit.  Because this is my secret blog I don't have to get all diplomatic about this woman.  I totally hate her but not in the way everyone else probably does.  It just really pisses me off when some bitch raises super kids and then thinks she owns the formula for perfect parenting.  Even worse is when she hawks her brand of bullshit like a commodity to other desperate moms (like myself) as the cure-all for our shitty kids.

Chua isn't smarter and she is not superior.  She is just lucky.  She happened to give birth to great, talented kids who were probably always destined for success regardless of parenting styles.  I would love, love, for her to take on just one of my kids for a week.  She wouldn't last an afternoon.  In all the excerpts I have read she really wants to convince us that her daughter Lulu was bad-ass.  No doubt, in Chua's eyes Lulu was a real handful.  But, compared to Frick and Frack, Lulu was a pussy.

Frick, like the Kamikaze, has no desire to live to fight another day.  In a face off with this kid nobody wins.  Ever.  Once you draw that line in the sand he will flash you a look of steely determination, dig in his heels, and settle down for the big fight.  In the end he is willing to destroy himself in as colossal a manner as he can contrive taking you and any innocent bystanders with him.  If I sent Frick outside in the cold and refused to let him in until he complied with my demands, he wouldn't just refuse, as bad little-Lulu did.  He would strip down to the core and freeze his little balls off screaming:

"There go your grandchildren!  Your move, biatch!"

Life as a Tiger Mother turned out to be a special kind of hell.  I hated my own existence and I couldn't sleep at night thinking about the fights of the day, considering the rarity of peace and happiness in our home.  It's one thing to go this route and have some measure of success at it.  It's quite another to do this to your kid with absolutely no pay off.   If anything Tiger mothering made things worse.  As it turns out, Frick has a very real learning and behavioural disorder.  Tiger mothering for kids with special needs is a recipe for disaster and even if it wasn't, there was no moment when I was acting like a Tiger that I wish I hadn't. Secretly I really respected Frick for his misguided refusal to back down.  I'm not sure I wanted to bully that quality out of him.  I didn't want to be a bully.  Period.

And so the next phase was my failed attempt at Elephant mothering.  I don't currently have some guru's name I can give you as expert on the subject because there are so damned many of them, and none of them stand out.  It's all this very bland, holistic, granola-mothering bullshit.  I'm not trashing this kind of mothering as a philosophy.  I actually can't think of anything to criticize about it except that, for about two weeks out of the month I turn into this: 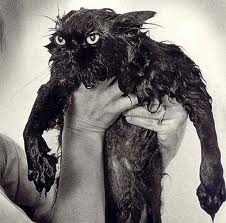 This is not the face of a woman who wants to wear a baby while cooking organic, preservative-free meals (that her kids won't eat) and showering everyone with limitless affection.  In fact this probably shouldn't be anywhere near a baby or children. This is something that should probably be medicated and left alone in a dark room until the evil has subsided.  It isn't fair to expect the Wet Cat Mother to be capable of Elephant mothering.  It sets real moms up to fail.  When I am Wet Cat Mother I tend to fantasize about being the "Rabbenmutter".

The "Rabbenmutter" or Raven Mother, is the mother who "selfishly" abandons her nest in pursuit of her career.  (You see, when women pursue careers it's selfish but when men do it they are "providing for their families").  This could have been me.  Only two things stood in my way.  The bad decisions of my youth and the fact that this term is meant to be derogatory as a criticism of Swiss and German women who are ambitious, but who had the misfortune to get knocked up.  No thanks, I deal with enough criticism and scrutiny as it is without volunteering for more.

And so finally, here I am in my last incarnation as the Panda Mother.  Like the Panda, I have pretty much given up and now rely on government programs and charitable organizations to keep me going.  The fact that I have offspring is kind of a surprise to me and basically, if they survive long enough to pro-create I have done a successful job and can feel free to die.  Here I sing my requiem in order to raise awareness because, like Pandas, Panda Mothers have as infrequent mating opportunities and it would be really nice if as many people were that dedicated to our getting it on.
Posted by Mommy Rotten at 2:16 pm