Last week I was invited to sit in and observe Frack's Kindergarten class.  This is pretty typical.  It's supposed to put the parents' minds at ease that their kids are indeed "learning through play".  This last one makes four Kindergarten observations under my belt.  But this last one was a little different.  It seems the little tykes of Room 13 are quite fashionable.  I studied these kids very closely and I think I have a pretty good handle on Kindergarten's hottest trends this season!

Wow, paper airplanes are big this year!  All the kids are making them.  They are so hot that some kids are stealing paper airplanes from the other kids.  Frack's paper airplanes are in particular high demand.  Since this trend started Frack insists that we make him airplanes almost every day at home.  My husband usually does the folding and I embellish the planes with flames.  Frack likes to add a few technical innovations, like stapling the nose of the plane.  They seem to fly better like that.

The kids are crazy for writing notes!  Can they read?  Not really!  Are they communicating anything through these notes?  Hell no!  Most of Frack's notes for example, are simply a list of his friend's names or words he copies from around the Kindergarten room.  But who cares?  They are awesome!  When the notes are finished they are typically rolled up into little scrolls and given to others as gifts but Frack and his trusty stapler (the stapler is literally his favourite art supply right now) has made a change that is sure to be the next big thing in note-writing.  Frack is actually learning to write short sentences like "Frack Love Mommy" and "Mommy Love Daddy".  He writes this down and then he folds the paper, staples the shit out of it and colours in a heart (that he insists I draw for him) on the outside.  It's so secure that NO ONE CAN READ IT.  Probably not even the NSA.

Frack has been wearing his scarf on his head like a headband for some time now.  I thought he was just being a typical weird kid but when I was in his class I realized that he is just very fashion savvy.  The kids love tying their scarves around their heads!  It's super popular!  In fact it's kind of a problem.  I watched the teacher tell three very unhappy looking kids that the scarves belong in the coat room, not on their heads in class.

Wait a minute.  Outdoor winter wear being worn indoors?  Reappropriating the use of a thing?  These kids are like the ultimate hipsters!  Don't give in so easily kids!  Fuck the establishment!

In Room 13 there are several activity stations but the most popular one by far was a station supplied with paper, crayons and popsicle sticks.  And every single kid there was making a rainbow they would cut out and glue onto a stick.  They played with these Stick Rainbows a lot.  Some rainbows were happy and some were sad and some had only eyes.  One creative little girl whose name begins with "M" made a rainbow that kind of looked like the McDonald's golden arches.  Well hot damn!  Double Rainbow on a Stick!


I just want to mention here that I became acquainted with "M" while looking at a picture of our solar system with Frack.  When I showed him which planet was Venus "M" piped up to tell us that "Venus rhymes with penis".

Which totally made me giggle.

Then my giggling prompted her to solemnly inform me that "penis" isn't funny and that just made me laugh more.  Seriously.  This five year old kid is waaaaay more mature than me.

And, awesome parent and role model that I am, I went on to say "Of course it's funny!  Have you ever seen one?"  And then I was grateful that none of the other adults in the room heard me say that because I probably crossed a line.

This is why I am going to hell.

Posted by Mommy Rotten at 3:11 pm No comments:

My husband just returned from this year's hunting trip.  Last year he brought me home a couple of ducks.  This year he was more ambitious.  This year he came home with a deer.

When he called me to tell me about his kill I begged him to save the hide.  Deer hides are nice and it seemed like a waste to not keep it.  He mentioned that getting the butcher to deal with the hide could be expensive so I told him to just bring it home and I'd figure something out.

I knew it was going to be nice but I wasn't prepared for how luxuriant it was!  I don't remember any petting zoo deer feeling this nice.  But it was also a huge mess.

I could see that this was going to be a huge chore.  I was going to have to prepare this thing for storage if we were going to have any hope of using it.  This involves scraping all the flesh and fat off the skin and then drying it out with salt.

It turned out that I knew more about tanning hides just off the top of my head than my husband.  When he told me I'd probably be dealing with this hide myself I asked him to keep the brains.  He thought I'd lost my brains until I explained that they are commonly used in hide tanning.  Where did I pick up this little bit of info?

And so when I sat down with my deer hide, my sharpest kitchen knives, and my dollar-store tablecloth I was no longer Mommy Rotten.  I was transformed into Ayla of No People, Mate of Hung-Like-A-Mammoth Jondalar and Great Healer Woman.

The first thing I had to do was try to check for ticks.  This is almost impossible.  The coat was so thick and deep that I just couldn't see anything.  I took the precaution of covering as much skin with clothing as possible.  I managed to find two, disgustingly bloated ticks.  Ugh, they looked like black jelly beans ((shudder)). 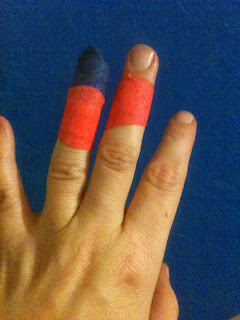 I was finally ready to proceed with my gross, squishy, messy job.  It took a while to get used to the technique.  All the videos on Youtube have people using some kind of round surface to work on but I wasn't getting any where with that.  I tried a few other ways but I ended up removing more flesh from my skin than the deerskin.

Eventually I found a method that was both safe and effective and started making some actual process.  It was very hard work.  I kept thinking about what it must have been like to depend on this skill for survival.  I started to day dream that I was Sacagawea.

I could tell I was impressing the hell out of my husband.  He kept telling me I was crazy, but I could hear the pride in his voice.  I imagined him bragging about me to his co-workers.  "My wife is tanning the hide of my first deer!" he would say.  "She is crazy resourceful."  And they would all agree that I am totally bad ass.  Maybe this would be my new hobby.  I'll tan all the hides my husband brings home and make awesome stuff out of them.  Maybe give them as gifts.  And someday, when the apocalypse comes we'll be sitting pretty because of my mad survival skills.

After getting about a quarter of the way through I decided to pack things up for the night.  I carefully wrapped up the deerskin and put it outside, taking extra pains to protect it from animals.  (It was wrapped in the tablecloth, put in a garbage bag, then in a box and then under our old broken microwave).  I figured I could finish the rest tomorrow, while the kids were in school.

So this morning I set up business again.  I had on my protective layer of clothing, I had all my clean sharp knives handy, I set up Silence of the Lambs on the TV to watch and got comfortable.  I was determined not to move from my spot until that skin was clean.

And then I learned something I did not know.

I did not know that ticks could be incredibly tiny.  I learned that fascinating little tidbit when I found one, no larger than a flea, crawling on my hand.

And then I screamed.

I found three more teeny tiny little bastards crawling on my jeans and six on the tablecloth.

And that's when I completely lost my shit.

I frantically tore off all my clothes and threw them out into the backyard.  Then I wrapped the deerskin in the tablecloth and heaved it out there, giving no fucks whatsoever if some animal hauled it off.  In a panic I gave the dog his flea and tick medication not able to remember exactly how many weeks it had been since his last dose and then thoroughly vacuumed my work area.

The whole time this is happening it's like I'm in the throes of some kind of coke addled paranoid delusion, screaming "Get 'em off!  Get 'em off!  Get 'em off!" every time I imagine the slightest tickle on my skin.  When I was finally sure my house and dog were safe I ran into the bathroom and gave myself a Silkwood shower.

And that proves it.  If we are ever in the Apocalypse we are pretty much doomed.

Sacagawea I am not.
Posted by Mommy Rotten at 1:16 pm 4 comments:

1) Sharing is good.  They should learn to share their candy (even if they can't possibly know they are sharing because they are asleep right now).

2) Frack's bag weighs as much as he does.  He can't possibly eat all that candy.

3) In fact it would be bad for him to eat all that candy.  In fact, it would be irresponsible of me not to eat some of his candy.

5) I should probably eat some of Frick's candy, too though.  He came home with three bags full, so he can spare a few pieces.  As long as I don't touch his full candy bar, he'll be fine with it.

6) They don't even like the Coffee Crisp bars.  I'm sure it's okay to have as many of those as I want.

7) Sure, the peanut butter cups are their favourite but they have so many of those.  They won't notice if I only take a few.

8)  I'll only eat the chocolate bars.  More than half of this candy is rockets, gummi bears and other crap like that, they won't be missing anything.

9) I put all the leftover candy that didn't get handed out into Frack's bag.  So it's okay to eat as many of those as I want.  I did pay for them, after all.

*Update*: I have eaten far too much candy.  Seriously.  I think I need an intervention or something.  OMG, I have no self control.
Posted by Mommy Rotten at 4:10 pm 1 comment: