A Tale of Comic Books, Zombies and All Around Bad Parenting

This is probably the most amount of effort I have ever put into being an irresponsible parent:

So this last Saturday I let Frack put on his Spiderman costume and together we walked on down to the comic book store.  There were lots of people there including a puppeteer with Kermit the Frog and some comic book writer/artist I didn't know signing autographs.  Frack got lots of attention for his costume, which he enjoyed.

We went to the table where they had the free comic books on display.  The deal is you figure out which ones you want and then tell the girl at the counter to get them for you.  Frack's books were easy to choose (Superman, Batman and The Smurfs) but I had a harder time choosing for Frick  A lot of the comics on the table were kind of young for him.  He's not as interested in caped heroes anymore.  He's not really into anything lighthearted like Archie or SpongeBob. And a lot of them looked to aimed at teen girls, which is awesome to me but not so much to Frick.

And then I saw this: 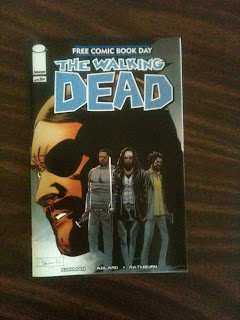 Oh man, if I get this for Frick I will score some seriously awesome Mom-points!  He's been bugging me for months to watch The Walking Dead but I told him I needed to preview it to make sure it's okay.  Really I can just ask my husband who'a already a fan of the show if it's okay but the truth is that I'd prefer for us to watch it together and I just don't have time to get into a whole TV show right now.  So this looked like the perfect thing for him.  I had to have it.

Except there I was in a comic book store with lots of witnesses and an adorable little boy in a Spiderman costume giving all of these witnesses the idea that I'm a pretty good Mom (in my head they think it....obviously no one gives a shit) so I have to somehow justify getting this rather questionable comic book for my 12 year old.  Because I need strangers to validate my parenting choices.  My inner dialogue went something like this:

Well it's not very well drawn, first of all.  Also, there is no colour; just black and white.  Frick loves Zombies and he managed to watch a couple of Zombie movies now with no ill effects.  Cartoons of Zombies can't be that bad.  I can always read it first just to make sure.  Also he's twelve!  That's almost a teenager.  By the time I was twelve I'd seen every Nightmare on Elm Street and most of the Friday the 13th.  And I turned out just fine.  Mostly...

Having convinced myself that this was an okay thing to do I worked up the nerve to tell the girl at the counter which comic books we wanted.  When I mentioned The Walking Dead one I even pretended to be responsible by making a joke about being unsure.  "Gosh, I hope I'm not going to regret this," I laughingly tell her.  This was a huge lie because I was totally sure I wanted that comic book for Frick.

When she heard me she went pale with shock.  She looked at me sideways and in a skeptical voice said, "I don't know....."

The girl bites her lip unsure.  "Weeeelllll.....How old is your son?"

She's looking me right in the eye.  She suspects something.  Lie!  Tell her he's fourteen!  No, don't lie.  That's stupid.  You are a grown-ass adult capable of making decisions for your kid.

"Um, twelve?"  Stupid!  You sound like you're guessing.  Now she thinks you're lying!

"Oh, well I definitely would not recommend this.  Here, look."

She flips through the comic and stops on a page that she finds particularly graphic.

"You see?  That Zombie no longer has his head on."


Really, this doesn't look bad to me at all.  I've seen way worse in other comics.  Frick's seen way worse on TV.  But the look on her face says, "You see?  Only a degenerate would allow a sweet innocent twelve year old to look at carnage like that."

And this is what a chickenshit I am.  I pretended to express shock and agree with her and then I picked another fucking comic book.  Because I didn't want some strange girl I may never see again, and who probably doesn't have kids anyway, to think I am an irresponsible parent even though I really am.

And as she went to collect the books I asked for I was silently kicking myself.

Why didn't I just get what I wanted to get?  Why do I care so much what people think of my parenting?  I could have been so bad ass by sticking to my guns and defiantly getting that book but I caved to peer pressure!  I'm such a coward!

I left the store filled with regrets.  I realized that the regret I was feeling was actually worse than any guilt I may have felt about looking like a bad Mom.  I realized I could have relished the look of shock and the inevitable shaking of the head when I did it.  I could have been a  rebel!

And even though I am obviously insane and ought to be ignored he totally did it!  He said he was lucky to get it because it was literally the last one.  He had to convince the girl to give him the copy that was taped to the table for display purposes.

As for Frick, his reaction was totally worth it.  The Walking Dead may be violent and graphic but it got my son excited about reading and in the end, isn't that what Free Comic Book Day is all about?
Posted by Mommy Rotten at 9:40 am