Take Back the Night....I Think I Get It Now

Last night I met up with my friend Jen to go to Take Back The Night.  I had never been before.

Why?  Apathy mostly.  I never really paid attention to when it was happening.  I had never been in a protest until a little over a year ago when I went out to support the Quebec Student Protest.  I was too busy.  I had no one to go with.  Because when I was younger a lot of the men in my life thought it was "stupid".  Excuses?  I have them aplenty.

I probably would not have gone this year either if my friend Jen hadn't told me she was going.  But I am very glad she did. 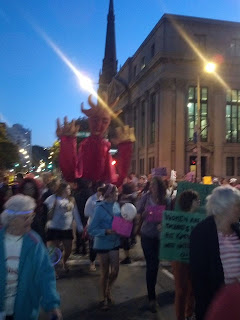 I first heard about Take Back the Night from my Family Studies teacher in 12th grade.  It was that bullshit class where they hand you an egg and tell you to pretend it's a baby for a week.  We spent the rest of the time cooking and balancing a household budget and somehow managed to squeeze in about 5 minutes of Women's Studies in there.  Because Women's Studies isn't a real subject, am I right?  I guess this was the proverbial bone thrown to feminist parents by our Board of Education.  (Either that or Ms. W went rogue on the system and forced it in there.  She was feisty like that.)

Anyway, during our Feminist Five she mentioned the Take Back the Night Rally and encouraged us to go, but only addressed the girls in the class.  I felt that this wasn't right.

I grew up surrounded by men and they loved to put down feminism ("bra-burning man-haters") and women in general ("silly", "soft", "weak").  I grew up listening to blonde jokes and dumb-woman jokes. I grew up being told about how terrible we are at driving and less deserving of equal pay because we "can't work as hard as a man".  When my step-dad was particularly pissed off at me or my mother the worst insult he had for us was "Lady".  Like calling us exactly what we were was insult enough.  I grew up with this and there was nothing I could do about it because in my house, men were running the show.

I understood on a deep level that the only way for any of this feminist stuff to work was to convince men that we don't hate them and to welcome and educate them.  So when my teacher let us know this was basically a "no boys allowed" event I was angry.  I felt like it was just perpetuating the idea that feminists hate men.  I argued passionately that this was just wrong.  My teacher's responses, though well meaning, were very unsatisfying.  She explained to me that many women at the event may be victims of some kind of traumatic assault or abuse from men and that they would find the presence of men too intimidating.

I had no response to this because I wouldn't want to make victims of abuse feel unsafe at a feminist rally but....still it didn't sit well with me.  The debate ended there since I had no counter argument, but I wondered if maybe the men in my life were right and this Take Back the Night thing is just stupid.

It took me 20 years to get over it.  I discovered that while Ms. W wasn't wrong, she didn't present the full picture of why it is so important for Take Back the Night to belong to women.  I don't blame her because it's a difficult thing to articulate, but I'll try.

I was 15 minutes late meeting Jen.  I had to mill around the crowd of women in front of City Hall to try and find her.  There were lots of women there and the crowd seemed to be getting bigger by the minute.  This was definitely the largest scale protest I had ever personally seen in Anytown.  It looked like people were being bussed in from out of town.  The Student Protest was pretty good with roughly 70 people there.  Tonight it looked like attendance was going to number in the hundreds.  I was soon engulfed by a crowd of women.

There was an amazing, happy and vibrant energy all around us.  No Doubt was blasting on the speakers.  Lesbians had a drum circle going.  Some women were in various costumes.  I saw one chick wearing a big purple tutu. There were women on roller skates handing out programs and those glow in the dark necklaces you buy at festivals and raves.  There were tables with placards and pamphlets full of statistics.  I told Jen it looked like a Feminist Science Fair.

This was the biggest event I had ever been to, belonging solely to women, that was NOT about birthing, babies and breastfeeding.  I had never experienced what it was like to be so completely immersed in Sisterhood.

I had never known what it was like to be part of something that didn't involve any men.  I mean, there were a couple of guys milling around in front of City Hall checking out the information booths and they seemed welcome enough, but when it came to marching it was just us gals.  (And Putin!)

How much of our lives can we say we have control over without male interference?  The majority of leadership positions are held by men. The majority of working women have male bosses.  In some places our reproductive rights are being decided by men without any input from women and in some places women don't even have the simple freedom of being able to drive somewhere by themselves.  Our daily lives are bombarded with comments, insults, come-ons, general harassment (and occasionally violence) perpetrated by men. 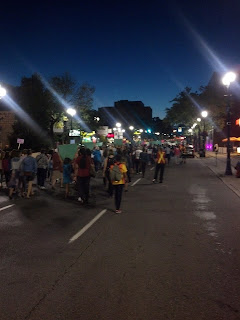 And then I thought about the way I grew up.  The many moments of  belittlement from my step-father.  Being told by him how to sit, how to dress, and above all to never forget to act like a lady so that when I angered him he could throw that fact in my face to insult me.  Being told that if I got fat when I grew up I would deserve to have my husband leave me (a fate worse than death).

Dealing with the aftermath of that one awful night when he beat the shit out of my mother and made me clean up her blood and hair from the dash board of his car, because cleaning is for women.....

And then I thought about the first and only time I told a boy I didn't want him to touch me and he slammed me against a wall and called me a "little bitch".  I thought about all the times I had to tolerate a man's leering and suggestive comments with a smile and a giggle so I could please not make him too mad at me and maybe he will just leave me alone and not hurt me.  How many times I was called a slut for no other reason than my choice of clothes.

I thought about all the times when I was single and had to enlist my biggest, scariest looking guy friend to pretend to be my boyfriend so I could feel safe dancing at the club.  I thought about how when I was 15 I wasn't allowed to leave the house without my little brothers as "protection" because there was a serial killer on the loose who targeted teenaged girls that looked like me.  And I remember how when he was caught I wondered how many killers were still out there that we didn't know about yet.  Knowing that they would want to target me because I'm a girl.  I remembered how understanding that fact changed the way I left my house and walked out into the world forever. 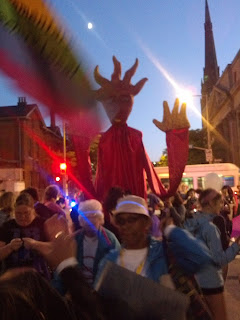 And I realized that there was very little (if any) of my life that wasn't policed and controlled by men in one way or another.  I knew all of these things before I went to Take Back the Night.  But I did not understand the raw power of female solidarity when we face up to these facts and say "No!  We won't take it anymore!"

So yes, I absolutely believe that as feminists we need to reach out to our brothers and make them welcome and enlist them in our fight.  But now that I've actually been to and experienced Take Back the Night I think I finally get it.

Where else in our lives are we allowed to take sole ownership of our selves on such a scale?  Lately it feels like we barely have a say in what happens to our own bodies.  We are frankly tired of constantly depending on the goodwill of men for our basic safety.  We are tired of being afraid.  Being allowed to express this without the help of men is crucial to our sense of empowerment.

So men, we love you very much but you dominate just about everything else in the world and in our lives.  We want you to be a part of our movement but please, could you let this one thing be just for us?  We need it so very much.

This post was a little more serious than I like.  I really had a lot of fun at the rally and so I would like to leave things on a light note by sharing this incredibly creepy sign from the "Corned Beef Hut" we walked past during the march.

I would also like to thank my friend Jen for making me go to the rally and for generously allowing me to post some of the pictures she took from last night including, and especially, this one:

And finally a little shout out to Queen Liz, who I ran into while we were there.  It was awesome seeing you, hon!  Kiss your grandbabies for me!
Posted by Mommy Rotten at 2:19 pm