I am the Overlord. All Shall Worship Me and Despair.

Most of my life I've had no control.  I've just always had to cope with whatever bullshit was going on around me, knowing I could never eliminate it.  When you're a little kid you think you're going to be a GROWNUP someday and as a GROWNUP you will surely rule the world.

As a GROWNUP I barely have control over my own brain, nevermind my own household, so forget about ruling the world.  As a GROWNUP the closest I've ever come to ruling the world is being free to choose what flavour of yogurt I want to eat and I don't even have that much control because Frack won't eat any yogurt that isn't vanilla flavoured.  I guess I could get a different flavour but I don't want to listen to the noise he'll make if he sees a strawberry on the package and no amount of showing him other vanilla flavoured yogurt in the fridge will shut him up. 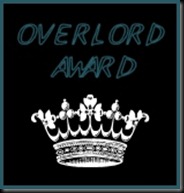 Shirley from Shirley Ewe Must Be Joking has awarded me with the Overlord Award which allows me to change anything (ANYTHING!) I want to, in the world.  Well, any three things.  But that's okay, I don't really want the responsibility of changing the whole world.  I only really want to change a couple of the things that affect me directly because I am selfish like that.  That's right I could end world hunger or poverty or the energy crisis, but like other people who have the power to change stuff like that for the better, I won't.

1) My Asshole Brain.  The first thing I would change would be my brain.  My brain is an asshole.  I have a very uneasy relationship with it.  Sometimes I swear it's trying to kill me.  Basically my brain spends most of its time running on some kind of hamster wheel in my head and chewing at the edges with thoughts like this:

"Hey, you forgot to call your grandmother.  You should call her.  Yes, it is two in the morning but I may as well keep you awake thinking about this now when there is just nothing you can do about it but think.  She's old and you didn't call her.  She could die you know.  Old people die all the time and she could be dead or dying right now and you didn't call her because her opinions on your mothering are annoying.  But she's probably dead or dying and it's all your fault because you didn't call.  Oh and you know what else?  You're totally going to die, too (scary).  Yup. You're gonna die and it will all be over and done for you because maybe there isn't a God or a heaven (scarier) but if there is you won't go there because you made your grandmother die from lack of calling her (scariest)."

2) Everyone Else's Asshole Brains.  Thinking about my asshole brain got me to thinking about other people's asshole brains.  Brains are, by their very nature, assholes.  You don't even have to have anxiety or any other psychological disorder for that to be true.  In fact our brains being assholes is the reason that evolution has allowed our species to survive this long.   There's no escaping it.

Since I was a teenager nothing pissed me off more than stupidity and I have often found that the most stupid people are smart educated people who don't know their brains are assholes.  Look, if you don't know your brain is an asshole then you will trust it and listen to it indiscriminately and that is just the very thing that causes people to join suicide cults and consider voting for Michele Bachmann.  We have tried educating people, we have developed entire schools of science, logic and critical thinking but it just hasn't been enough.

Now that I have taken care of my own personal problems with the power of Not Giving a Fuck, as Overlord I will help the world after all by evolving the human brain to think properly.  And with that one simple step just about everything in the world is solved and I will get to be a lot less pissed off.  We'll stop screwing around with issues like global warming or gay marriage and just set to fixing all of our shit.  I'm not sure what this would do for human tendencies towards greed or lust or selfishness but it would go a long way towards pulling our collective heads out of our asses, non?

3) No More Dishes!  I accomplished a lot with the first two things so picking the last one was hard.  But after much deliberation I decided that I would like for the men in my house to do the dishes.  All the time.  If there is any one issue that has caused consistent and reliable dischord in our home it is the washing of the dishes.  If I spend any time away from home somehow every dish, every cup and every last utensil from spatulas to teaspoons gets dirty.  And they are lying around all over the house.  And they are full of nasty, crusty, smelly food.  And I am the one who has to hunt them down and wash them all.

You know what I hate?  When someone makes a tea and then leaves their teabag in the tea and then doesn't throw out the teabag when they are done drinking the tea and then I have to put my hand in there and touch their cold, squishy teabag and no matter what weird and creative method of disposal I use I always end up touching it.  Ew!  I also hate the ring of milk or cream crusted inside the cup and the fact that once I find all the dishes I can't even wash them right away because they have to soak first.  And sometimes I don't find all the dishes, but I do find them all eventually.  (One of these days I will do a post on everyone's favourite game:  What's That Smell?)

I used to want them to wash any dishes they dirtied.  When that failed I lowered the bar to only scraping, rinsing and stacking them.  Now what I wouldn't give if they could just end up in the kitchen somehow and not under (or inside) the furniture.  So for my final act as Overlord I would like for the guys in my house to just wash the dishes from now on, no arguments, no fights, no begging.  I have done my share of dishes for several lifetimes and I would like to be done now, please.

And now that I have used up my (imaginary) powers it is time to bestow them onto other deserving individuals.  Drumroll please....

After reading their blogs for a while now I would love, love to see how they will use their Overlord powers.
Posted by Mommy Rotten at 12:32 pm