Are YOU Mom Enough?

I'm sure you all have been waiting to hear my response to Time's controversial cover depicting a beautiful young woman defiantly breastfeeding her four year old looking three year old. 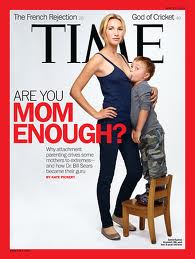 To be honest I've been hiding from this.  I really didn't want to respond to it.

Because it's bullshit, man!

This is just another example of the media playing into the Mommy Wars bullshit and I fucking hate it.  If you want to know what is holding women back it is bullshit like this.

Do you think I find her confident and defiant look inspiring?  Go to hell, Time magazine.  Seriously.

First let me say what I have always said about breastfeeding: meh.  I breastfed my boys until they were three and I can tell you it is not for everyone and it's not necessary to go beyond your first year or to even do it at all.  I wasn't trying to be defiant.  I wasn't trying to be a feminist.  I wasn't even trying to be a superior mother.  It just happened to work for us.  I knew full well how totally weird it looks for a walking, talking pre-schooler to breastfeed so I kept that shit tight and tried to avoid doing it in public.  And as far as what any woman feeds her kids, so long as she is feeding them, I don't really give a rat's ass.

Because being a Mom takes serious bad-assitude and you do whatever you have to in order to get by.

This cover pisses me off because I don't feel supported by it.  I don't feel like my mothering choices have been validated.  I don't feel like the public is being educated in order to develop sympathy for me.  I feel like Time Magazine put a target on me and women like me so that, should any of us have to nurse our pre-schooler in public for whatever reason we are no longer feeding/comforting our kid.  We are defiantly looking around at all the other Moms and saying "Are YOU Mom enough?  Yeah, I didn't think so."

This did nothing to advance any kind of understanding about the culturally foreign concept of extended nursing. All it did was exploit us, turn us into sideshow freaks to be gawked at and resented, so they can sell more magazines.

As a woman who happily nursed her children beyond the first year I would like to say "Fuck you, Time magazine.  Thanks, but no thanks."