I am a product junkie.  I just love trying new shit out and finding that next great thing.  I mean who doesn't love cool shit? Oprah and Gwyneth know we all love cool shit and have capitalized on that by transforming themselves into cool-shit gurus.  And why not?  Surely influential women like Oprah and Gwyneth would know about the best shit.  And they do.  Their shit is amazing if you're like, a petty millionaire or the ruler of a small nation.

But, if you're the kind of person who hesitates to drop two weeks' worth of milk money on a bar of soap (for real?) you've come to the right place.  I know about good shit.  My shit is also the best shit only I can guarantee that you can get yourself every item on this list for a fraction of the cost of Gwyneth Paltrow's exclusive, cheap ass looking white T-shirt (Seriously?  I can see right through that thing.  Don't you know anything about thread count, Gwynnie?)

Blair Elements makes all kinds of fancy teas but what caught my attention (since I'm more of a coffee drinker) was their fancy soaps.  Patchouli Blood Orange is their most popular one and my favourite because the scent lasts a long time on your hands.  They have a wide variety of scents like Sandalwood, Pineapple Upside Down Cake and Cedar Vetiver with Pumice and they will only set you back about $6 a bar.

They are so good I can't imagine Oprah's being any better unless hers are made from rendered unicorn fat.  (Which they probably are.  Fucking rich people.)  The bars last a long time and are pretty big so I cut mine into halves or quarters to make them easier to handle.  Also try their bath bombs.  I get myself one every Mother's Day and it's heaven in a bathtub. 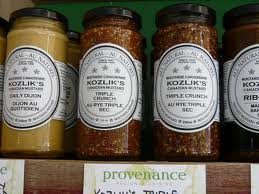 If you are a mustard lover then do I have the mustard for you!  Yes, it's expensive but not break-the-bank expensive.  At $6 a jar it is worth every penny.

Kozlik's mustards come in an insane variety like Balsamic Fig & Date, Green Peppercorn and Orange & Honey.  My personal favourites are Amazing Maple and Honey Garlic.  They go great with a lot of foods but most of the time I just eat up the mustard with nothing but a bag of pretzels for dipping. 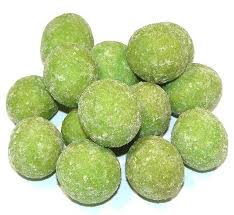 For the adventurous snacker!  One day my husband came home with these green goodies and dared me to eat one.  After a few moments of working up the courage I popped one in my mouth.  It starts with a nose-clearing, eye-watering sting followed quickly by the natural sweetness of the rice coating and the peanut inside.

I quickly became hooked.  I buy them at the local farmer's market but for those of you not from Anytown you can get them online at Try My Nuts (love the name!).  If you like the peanuts you will love the wasabi peas which have even more bite.  Don't be afraid to try them.  I've fed them to Frack since he was a toddler and he adores them.  Mind you Frack is very weird in some of his snack choices.  His favourite foods include olives and Keen's Hot Mustard.

I love growing tomatoes because they are just about impossible to fuck up.  They seem to thrive in poor soil and less than optimal watering which suits my gardening style just dandy.

My favourite to grow are these Cherokee Purple Heirlooms because they are monsters.  I've never seen tomatoes so huge in my life!  Don't even try using those pathetic little wire  tomato cages for these suckers.  I have to tie them directly to my fence and hope like hell they don't pull it down.

Fresh garden tomatoes are the best no matter what variety you grow but with these babies, knowing the grocery store charges $5 a pound for them, they're just so much more satisfying.  Each summer I feel like I've pulled $500 out of my tiny garden and it only cost me some sweat and a $3 packet of seeds.  Cherokee Purples are very big and sweet and juicy and are better for eating raw than cooking but I've managed to make some decent soups and bruschettas from them.

I am addicted to lip balm.  Apparently everyone who wears lip balm is addicted to it.  A friend once told me they put an ingredient in lip balm that actually dries out your lips creating a dependence on the product.  I don't really know how true this is but I noticed when I switched to a more natural product I was needing to use much less of it than Chap Stick or Vaseline.

My mother in-law introduced me to Burt's Bees and that is now my exclusive lip balm-crack.  I refuse to use anything else.  They come in other flavours like pomegranate and pink grapefruit but the best is their original mint lip balm in a tin.  The advantage of buying the tin is that it costs the same as a tube but you get twice as much.  My whole family uses this shit.  Yes, it does cost twice as much as the regular stuff ( $5 a tin) but because it works better, it lasts a lot longer.

One year I was in a mall trying to do my Christmas shopping when I got stopped by a girl working one of those kiosks you find in the middle of the mall that sell sunglasses and jewelry and shit.  Only hers sold beauty products.  No not beauty products.  Beauty miracles!  From mysterious Israel!  And I knew it was totally legit because the girl was beautiful and from Israel.

She seized my hand and started furiously buffing my thumbnail with her special, magical buffing block that, she whispered, was coated in micro-diamonds found in the mysterious sands of Israel's beaches along the Dead Sea.  Or something like that, I think.  It was hard to pay attention.  All I know is that when she was done I could see my face reflected in my pretty, shiny fingernail and I just had to have that block!  But I couldn't have it because I had to spend all my money on other people (stupid Christmas!).

The worst part was that she liked me so much she was going to give me this special deal that I must NOT tell her boss about because she would get into BIG trouble.  See, they needed to charge at least $60 for the whole manicure kit (complete with mysterious herbal oils to moisturize your nailbeds) just to cover the cost but since we were such besties now she wouldn't dream of taking more than $17.99!  Scandalous!  I had to regretfully decline and she bid me a heartfelt goodbye, squeezing my hand as she urged me to come back and speak only to her for that special secret deal.  It was all very emotional.

About a month after Christmas I found one in the drug store for $4.

It may not be made from the magical sands of the Dead Sea but it works just as well.  I love mine because I like my hands to look pretty but I'm not very good at painting my nails.  They always look like they were painted by a drunken kindergartener.  With this I can have pretty, shiny nails without all the mess and fuss.

I think I could be pretty good at this.  You see, ladies?  Poor people like cool shit, too.  You might do well to remember that while you're hawking $25 socks at us.  "Great Gifts on a Budget" my ass.