Random Facts About Canada for Kids (Almost No Swearing In This Post!)

I dedicate this post Yvonne's son from Attracted to Shiny Things. 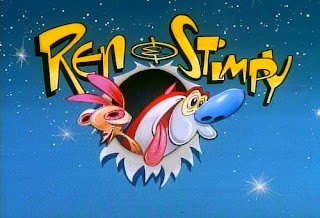 First, let me say I love your fashion sense.  I have a son who wears superhero costumes too and I think our whole neighbourhood is safer because of it.

Your Mom has brought it to my attention that you have some questions about Canada; namely that you were wondering if it rained wieners up here, like it did in a Ren and Stimpy cartoon.  Unfortunately it does not.  I live in a house with all boys (even my dog) and sometimes it feels like it's raining wieners but it really isn't.  However Canada is pretty different from America and, being an expert on all things Canadian, I would like to tell you about it.  Because I am all about education.

I'm glad to see you like Ren and Stimpy.  I love that cartoon!  And you will see all kinds of weird things in there because it was created by a Canadian.  We have a bizarre sense of humour up here.  Why?  I sometimes think it's because we spent so much time being really, really boring.  You see, you will learn (or have learned) in school that your country was born from an exciting Revolutionary War with the Forefathers signing the Declaration of Independence.  And every Fourth of July you guys celebrate all that cool stuff by taking the day off and blowing up firecrackers!  The American War of Independence is a big deal and a great moment in history.

The history Canadian kids have to study is mind-numbingly boring compared to that.  Canada never had a revolutionary war.  In fact we are still technically a colony of England.  Look at our money: we have a picture of the Queen on it.  And up until about fifty years ago our national anthem was "God Save the Queen".  So you'd think we might have missed out on having our own firecracker holiday.  But you'd be wrong.  In Canada we get two firecracker holidays!  One in May to celebrate the birthday of a Queen who's been dead for a long time and one on the first of July when we celebrate Canada's birthday.  We think this helps compensate for all those boring history lessons. 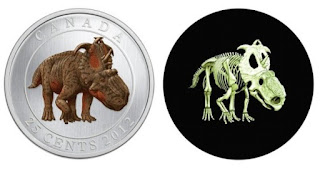 Our money, aside from having picture of the Queen on it, is kind of funny because it is multi-coloured and looks like the money you get in Monopoly.  We also have $1 coins called "loonies" (because there's a picture of a loon on it) and $2 coins called "toonies" (because it rhymes with "loonie").  This spring we minted a quarter that has a glow in the dark dinosaur on it.  Seriously!  How cool is that?  The only thing that could make this any cooler is if the Queen's head turned into a glow in the dark skull.  It doesn't but it totally should.  This just happened back in April and I haven't seen any of the coins yet, but I will be happy to send you one in the mail as soon as I get one.  Apparently we have dug up a lot of dinosaur bones here and the one you see on this quarter was discovered in 1972 and was 26 feet long.

So, other strange things about Canada.  Well, we are officially bilingual, which means that every Canadian kid has to learn French and English.  It also means that all of our signs and labels are printed in French and English and it means that Montreal cabbies will take advantage of you/rip you off no matter how good your French is just as soon as they hear your English accent.

I went to Quebec a few times and I learned that you can buy wine at the corner store (which you can't do in the rest of Canada) and I picked up a few French swear words.  Yes, I'm totally going to tell you how to swear in French because French swear words are really no fun and won't offend anyone unless they are Catholic and understand French.  I don't think your Mom will mind.

Viande!  (Pronounced vee-ond)  Literally means meat but is referring to the body of Jesus.

As you can see these swear words are pretty boring, but they are pretty offensive to our French Canadians. Mostly they are offensive because they are like taking the Lord's name in vain or something like that.  Basically the rule of French swearing is to just find out how to say religious things in French and then shout them at someone you don't like.

There's a lot of wilderness in Canada.  In my neighbourhood I have been close enough to touch deer, coyotes, foxes, rabbits, skunks and raccoons.  And many, many, many Canada geese.  They're kind of a problem.  They are aggressive and noisy and there's goose poo everywhere.  When we go camping I see all those things and sometimes beavers and muskrats.  I saw some moose on a golf course once but that was when I went on a trip to Vermont. I've never seen a whale or a seal but my friends have.  One of my friends even met face to face with a Grizzly bear at her cottage and lived to tell the tale.  Also, I'm pretty sure British Columbia has mountain lions. 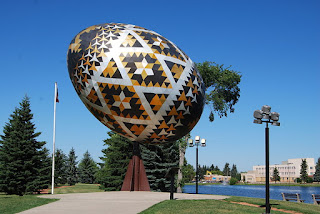 -Somewhere in Alberta we have a giant Ukrainian Easter egg, called a "pysanka" egg.  We love giant things.  We also have a giant nickel, a  giant loonie and a giant toonie.  There are so many giant roadside attractions in Ontario alone that it would take me too long to list them all. 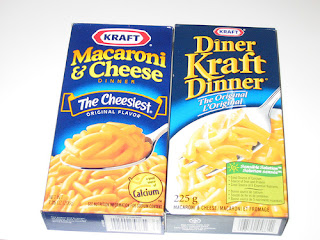 -We eat more macaroni and cheese than any other country on the planet.  Only what you might call "Kraft Macaroni and Cheese" is known up here simply as "Kraft Dinner".  And guess what our favourite thing to eat with Kraft Dinner is?

-Many Americans think some of us live in igloos.  We don't.  Not even our Inuit people do.  You might know our Inuit people as "eskimos" but we try not to use that word because it's actually racist.  We do however build ice hotels every winter and you can actually sleep in them on beds made out of ice.  They cost about $600 dollars a night.

-Yonge St. in Toronto is the longest street in the world at 2,000 km (that's 1,243 miles) and we also have the world's longest coastline.

-We aren't as polite as everyone says we are.  We have jerks just like everyone else, but we're more likely to apologize for that fact.  It's true that Canadians apologize a lot.

-We spell things differently.  I took the liberty of highlighting all the words that are spelled "Canadian", which usually involves adding the letter "u" to things that don't really need it.  It seems like a little thing but it's actually a big deal to us.

-There are a lot of famous people from Canada.  Unfortunately that does include Justin Bieber.  Sorry about that.

And that's about it for now, I think.  It's not always easy trying to find out what is interesting about us to Americans because we live here and think of everything we do as "normal".  America just seemed so much cooler to me when I was your age so I picked the stuff that might have made me think we were cool, too.  I love being Canadian now that I know more things about us, but a lot of that stuff would probably be pretty boring for a kid to learn about. 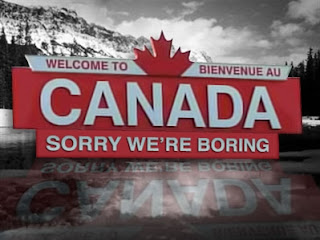 I would love to answer any other questions you might have about Canada. Hopefully someday you will come and visit Canada and you will have no problem fitting in with all your knowledge of Canadian culture.


But if you do visit, be sure to come in the summer.  It doesn't snow all year round but when it does it gets really cold!
Posted by Mommy Rotten at 12:04 pm