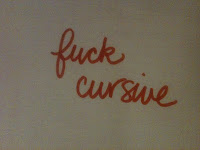 So about a week ago I came across this article: Why Johnny Can't Sign His Name.  In the article a father laments the fact that his 14 year old son can't sign his name because he was never taught cursive in school.  This man is in a swoon because his son printed his name instead.  His reaction, in my opinion, is a little over the top.  He says, "When I picked myself up off the floor...I was absolutely shocked."

You're acting as though the kid is completely illiterate and just signed his name with an "X".

I tried to take this issue seriously.  I am a huge supporter of writing and literacy but I just can't get on board with this one.  Because every way I look at it I have to ask just what kind of damage is being done to our kids by dropping cursive and the answer seems to be no damage at all.

Says the Dad (no doubt while hysterically untangling his underwear), "Your signature is your mark.  Are we having a whole generation who can't write their name?  How are you supposed to sign cheques - put your fingerprint on a legal document?"

Actually that sounds like a fan-fucking-tastic idea!  Welcome to the future people.  Signatures can be forged but unless you are willing to commit some kind of grisly, gangland-style maiming/murder it's probably going to be pretty damned hard to get away with forging a fingerprint.  And this isn't a new idea at all.  In ancient Babylon fingerprints were used as a means to protect against forgery and Ancient Asian cultures used fingerprints and handprints as signatures for hundreds of years.

Speaking of history, about 600 years ago, Gutenberg's printing press began to render calligraphy into a quaint, artistic pastime.  I'm sure the establishment would have found this devastating had they not been pre-occupied with populations who used the new technology to read and distribute information widely, ushering in the Age of Enlightenment and fomenting revolutions that ultimately led feudal Western Civilization into Democracy.  (Phew!  That was a mouthful!)  For us, the death of calligraphy at the hands of print culture was called progress.

So why cry over the loss of cursive?  I fucking love typing!  I used to do all my writing in cursive and my hand  is just way too slow for my brain.  I often wouldn't finish things I started because it was too messy and frustrating and my hands would get cramped up and sore.  Also I can write beautifully when I try but for the most part my penmanship is terrible and always has been.

I had to develop a sort of half-cursive-half-printing script to make my quick writing legible to myself and others.  (The above picture took me several tries to write in my best old-fashioned cursive and I still lapsed into my print-cursive script on the "r" and "s").  It wasn't until I started blogging on the regular that I discovered how much better a keyboard is for getting the ideas out.  Like a MILLION TIMES BETTER.  I write best when I can just get the words out as fast as I can think them and then edit myself later.

(If you could see how many times the F-word shows up in an average blog post before I edit you might call my sanity into question.  Seriously.  I make Jason Mewes sound like Ned Flanders.)

And isn't getting the ideas out the most important part?  Isn't that the reason penmanship used to be such a big deal?  So that other people could understand your ideas and build on them and create progress for humankind?  Isn't that why we went to print hundreds of years ago?  To disseminate information freely and quickly to cause the kind of revolution that dragged our asses out of the dark ages?  Isn't that why we type today?

Obviously we aren't using our fingerprints as signatures yet but that is definitely on the horizon and it looks like it is going to make all of our lives a little bit easier.  Until then, of course Johnny needs to sign his name.  But do we really need to use up public money and precious school time on it?  I'm pretty sure it should only take about an afternoon to teach your kid how to write the two or three words that make up his name.

And really, it probably doesn't even matter if he knows how because, as I've mentioned before, no one can read a signature anyway and it doesn't seem to hurt them at all.  Check out Treasury Secretary Jack Lew's signature:


They say it looks like a Hostess cupcake.  Laugh all you like but he's the freaking Secretary of the Treasury so clearly his signature has not handicapped his job prospects in any way.  In fact it seems like the only job you might get screwed out of is cake decorating.  And I guess that is horrific.  A future filled with cake wrecks...